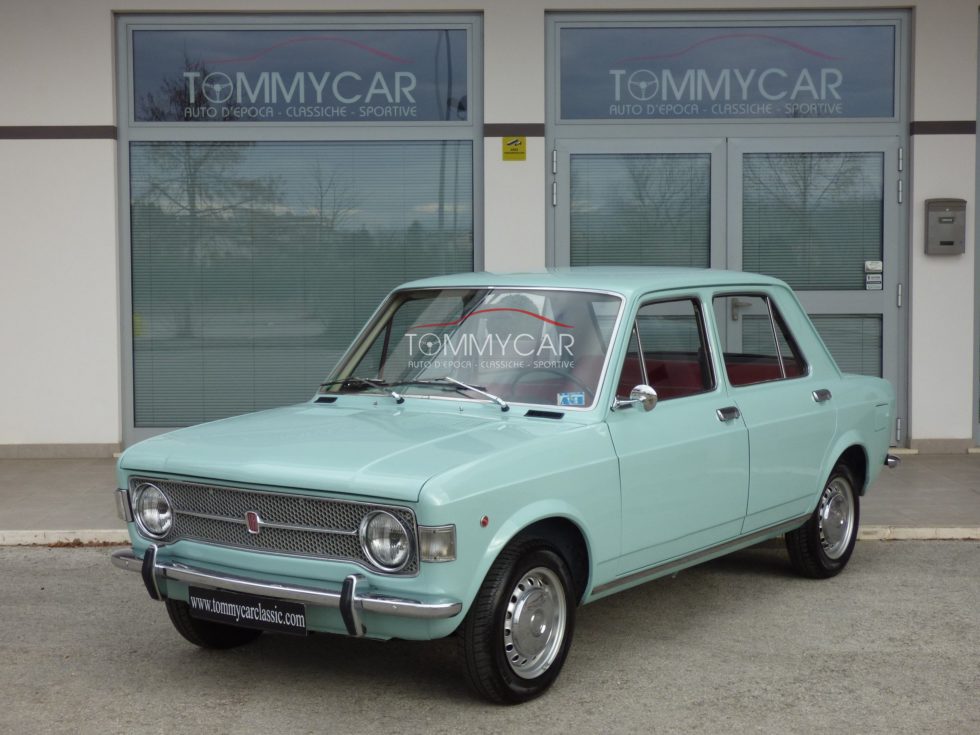 2 owners of the same family.

The first series of the Fiat 128 was launched on the market in April 1969. The first production car with the FIAT front-wheel drive brand was designed by Ing. Dante Giacosa (father of all FIAT models until the early seventies), and was considered a cutting-edge car.

In those years the whole configuration was a solution that was not widespread in Italy and until then opposed by FIAT’s top management. The real innovation compared to almost all the pioneering competitors of front-wheel drive was the motor-transmission unit mounted in a transverse position, with the gearbox in line on the left of the engine, which allows an optimal exploitation of the space in the passenger compartment. This scheme, adopted today by all manufacturers on small-medium front drives, is significantly called “Giacosa arrangement” by the Italian engineer.

The 128 is also characterized by other innovative technical choices: the independent four-wheel suspension consisted of a McPherson at the front and a suspension with transverse crossbow, also acting as a stabilizer bar at the rear.

The interior is more characterized by functionality than luxury, with a simple and rational dashboard, seats upholstered in imitation leather, simple finishes and a remarkable internal habitability, also thanks to the absence of the central tunnel.

Only one engine was available for the debut: a new 4-cylinder in-line engine of 1116 cm³ of 55 hp, with an overhead camshaft driven by a toothed rubber belt, which directly controlled the tappets without interposing rocker arms. The maximum speed was declared in about 140 km / h.

The line, rather angular and devoid of concessions to extravagance, follows the stylistic dictates in vogue at the time, already adopted by FIAT for the previous models “124” and “125”.

The “128” immediately achieved a remarkable sales success throughout Europe, even winning the Auto of the Year Award in 1970. The designer Giorgetto Giugiaro narrates that, going to Wolfsburg to present the sketches of the design of the future Golf, he saw in the department Volkswagen design a “128” completely disassembled; in fact, the German technicians believed that the Fiat sedan was the best example of a modern “medium-small car”, which was inspired by the technical scheme.

At the time of the launch, the Fiat 128 was confronted, in its category, with few front-wheel drive models, the Peugeot 204 and the Simca 1100 (already with tailgate body), compared to which it offered more modern driving qualities, while technically and dynamically outperformed the Ford Escort Mk1 and the Opel Kadett B with rear wheel drive …

This announcement is valid except for transcription errors and does not constitute any contractual obligation.

TOMMYCAR since 1999 twenty years experience and professionalism in the sale and restoration of classic, classic and sport cars.

The cars for sale are the exclusive property of TOMMYCAR to guarantee selection and quality, sold with a regular contract and sales invoice.

We receive in the new showroom only by telephone appointment.

Questo sito utilizza cookies tecnici per migliorare l'esperienza di navigazione, clicca su ok per accettare oppure leggi l'informativa per capire come funzionano i cookies ed eventiualmente comprendere la modalità di disattivazione tramite browser. - We are using cookies to give you the best experience on our website. You can find out more about which cookies we are using or switch them off in settings.

This website uses cookies so that we can provide you with the best user experience possible. Cookie information is stored in your browser and performs functions such as recognising you when you return to our website and helping our team to understand which sections of the website you find most interesting and useful.

Strictly Necessary Cookie should be enabled at all times so that we can save your preferences for cookie settings.

If you disable this cookie, we will not be able to save your preferences. This means that every time you visit this website you will need to enable or disable cookies again.